Pharmacy Benefit Managers, or PBMs, are largely unrecognized by most employees and even many employers, but they have a tremendous impact on U.S. health care decision-making.

For example, the top three PBMs control 80% of the market.1 CVS Caremark, the PBM for CVS, is the second largest PBM in the U.S., accounting for nearly 33% of covered lives.2 This significant market share allows CVS Caremark (as well as the other largest PBMs) to exercise undue market leverage and generate outsized profits for themselves.

PBMs determine which pharmacies will be included in a prescription drug plan's network and how much said pharmacies will be paid for their services. Some entice plan sponsors to require plan beneficiaries to use a mail order pharmacy – often one owned and operated by the PBM – for certain medications. They also determine which medications will be covered by the plan or plan formulary, and drug manufacturers often pay “rebates” to PBMs to get their drugs onto those formularies. While their role goes largely unnoticed, the nontransparent nature of the traditional PBM business model can add hidden costs and lead to higher prices.

"Expansions of prescription drug coverage over the past 10 years mean that PBMs are involved in a majority of prescription drug transactions today. In light of that fact, transparency regarding the PBM industry is needed so that purchasers of these services in both in the commercial and government sectors can make well-informed decisions." – Applied Policy® Report

Download examples of mail order waste - Waste Not, Want not.

And finally, check out our PBM Manual  and PBM Toolkit and list of recent media articles related to PBMs. 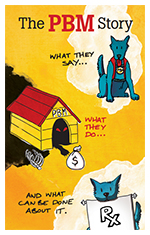 It's important to note that some prescription drug plan sponsors are seeking alternatives to the traditional PBM model. In 2016, 20 large employers – including Coca Cola, Marriott, and American Express – formed the Health Transformation Alliance to break away from “existing marketplace practices that are costly, wasteful, and inefficient,” including issues with prescription medications. HTA now consists of over 40 major corporations and covers more than 6 million lives.

Not all companies or plans have the market power to form or join such an organization, but there are other options they can turn to in order to achieve greater transparency and lower prescription drug costs. One option is a Transparent PBM – a PBM that takes a flat administrative fee for each prescription and doesn't profit from spreads on drugs or secret incentives. One plan sponsor saw their prescription drug spend drop by $2 million in the first year after they switched to a transparent PBM.

Another option for plan sponsors and health plans is using a pharmacy benefit administrator, or PBA, instead of a PBM. PBAs handle administrative services for the plan sponsor, such as claims processing and data reporting, while the plan sponsor handles other functions such as formulary management, rebate negotiations, and contracting with pharmacies for network participation.

Each of these alternatives provides increased transparency to plan sponsors and can help lower prescription drug spending.