Pharmacy benefit managers were created as middlemen to reduce administrative costs for insurers, validate a patient’s eligibility, administer plan benefits, and negotiate costs between pharmacies and health plans. Over time, PBMs have been allowed to operate virtually unchecked. A lack of transparency in PBM practices has led several states to implement licensure/registration, fair pharmacy audit, or generic drug pricing legislation to try to level the playing field for pharmacies and patients.

PBM licensure and registration
PBMs control virtually every aspect of one of the most critical and costly aspects of the health insurance benefit – prescription drugs – yet the state has little defined oversight authority over PBM operations. This leaves pharmacies, patients, and plan sponsors with little to no recourse against PBM abuses. To combat this, states are beginning to require PBMs become licensed or registered with the state department of insurance or board of pharmacy to provide the state with more defined oversight authority over PBMs.

Fair pharmacy audits
PBMs typically audit pharmacies to detect any improper payment by the PBM on behalf of the plan or consumer and to verify that the patient received the correct medication in the appropriate dose. However, many times PBM auditors go beyond the basic intent of the audit – to detect fraud, waste and abuse – and instead focus on typographical or administrative errors, which they use as the basis to recoup money from the pharmacy. Some of these auditors are even paid based on the number of "discrepancies" found, which creates a conflict of interest.

MAC transparency
A "maximum allowable cost" or MAC list refers to a payer or PBM-generated list of products indicating the maximum amount that a plan will pay for generic drugs and brand name drugs that have generic versions available ("multi-source brands"). No two MAC lists are alike, and each PBM has free reign to pick and choose products for their MAC lists. There is no standardization in the industry regarding criteria for drug inclusion on MAC lists, methodology used to determine maximum price, or methods for updating and changing list information.

Pharmacy patient protections
In addition to the three issues mentioned above, there are several nuanced issues regarding PBM practices that hurt pharmacies and patients alike. NCPA has developed a set of resources that covers a course of actions employed by PBMs that are harmful to both patients and our members.

1. Additional accreditation and certification requirements
State boards of pharmacy are charged with protecting the health and well-being of the citizens in their state. When PBMs start making decisions regarding who can practice and how they can practice, they are stepping into the domain of the state board of pharmacy and restricting access to otherwise qualified pharmacists. This has negative consequences on patient access to care and patient choice.

3. Pharmacy delivery service restrictions
Prohibiting home delivery hurts patients with restricted mobility and deprives them of their ability to receive their medications from their community pharmacist.

4. Copay clawback prohibition
Under almost all health care plans, patients are responsible for a certain level of cost sharing. With this model, the patient assumes they are paying a portion of the cost and their insurance company is paying the remainder. The practice known as "copay clawback" turns this premise upside down. In this case, the cost of the medication is lower than the patient's copay, but the patient's PBM instructs the pharmacy to charge the patient an inflated copay. Later the PBM "claws back" the excess from the pharmacy and keeps it for themselves. 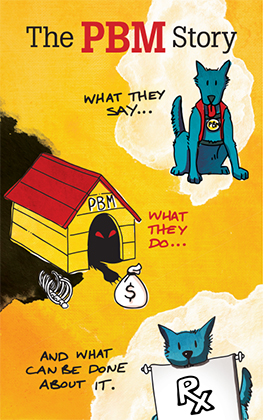 Want an easy way to share and explain this information? Check out our PBM Resources section and some of our issue-specific one-pagers.