My first memory of him was that he was the guy with the Quaker-style beard and a name that, at the time, reminded me of the Swedish chef from The Muppets. 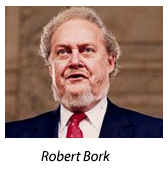 Robert Bork first hit my radar while I was in high school in 1987 and he was nominated for the Supreme Court. But his lasting legacy is his views on antitrust laws, which have fueled corporate merger mania over the last four decades.

The three major anti-trust laws in the U.S. are:

The most recent of these three laws was passed in 1914—over a century ago! A lot has changed in the U.S. economy since then. In 1914, the three largest industries were steel, oil and gas, and mining. Compare that to today's largest industries: technology, financial service, and medical. It's easy to see that we live in a different world today.

The Sherman Act was created to promote economic fairness and competition. It passed 51-1 in the Senate (the only vote against was by Sen Rufus Blodgett, a one-term Senator from New Jersey who was superintendent of the railroads for 25 years) and 242-0 in the House. Talk about a different world. Today's divided Congress sometimes can't even name a post office without dissension.

Bork was a Yale Law school professor who called the Sherman Act a "consumer welfare prescription." His book, "The Antitrust Paradox," helped reshape conventional thinking on antitrust to focus on "consumer welfare" rather than competitors. In other words, mergers or acquisitions that appeared to lower consumer costs—at least on paper—were generally found to pass muster. From Amazon's (speaking of monopolies) summary of the book: "… shows how antitrust suits adversely affect the consumer by encouraging a costly form of protection for inefficient and uncompetitive small businesses.".

One doesn't have to look far to see where industry consolidation through mergers or acquisitions has had an adverse impact on consumers. Because of the pandemic, perhaps you haven't been on an airplane lately. But next time you fly, take your pick of which carrier will give you the least awful root canal-type experience. And of course there is health care. Mergers have resulted in many physicians no longer being independent; instead they are now employees of sprawling health systems that have consolidated in response to insurance company mergers. From the pharmacy perspective, we have all seen what took place when CVS was allowed to acquire Caremark in 2007 and in 2012 when Express Scripts was allowed to buy Medco. In each case, NCPA urged the FTC to stop the transaction. In the case of CVS Caremark, NCPA was successful in lobbying Congress to urge the FTC to review the merger. In the case of ESI-Medco, NCPA and NACDS sued to block the merger. In both cases, the FTC saw no harm, or not enough, to stop the mergers and waved them through.

Bork died in 2012, but his philosophy lives on. There are some glimmers of hope for small businesses and consumers. Large technology companies such as Facebook, Apple, and Google seem to get the most attention. Perhaps that's partially due to Jeff Bezos' ownership of The Washington Post and Google having a 92.4 percent share of search engine market share. (That's a lot of cookies they're sprinkling on devices.) The current FTC Acting Chair is Rebecca Kelly Slaughter. She has signaled that not only will she be reviewing consolidation in the technology industry, but also reviewing consolidation among pharmaceutical companies in ongoing efforts to bring down the high cost of drugs. Community pharmacists would agree that the cost of drugs is driven upward by an increasing lack of competition in the PBM market. In fact, three companies control more than 76 percent of the market, which we contend doesn't allow for meaningful competition to drive down drug pricing. 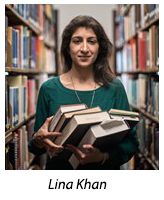 Another interesting development that could reshape the FTC is the nomination of Lina Khan to be a commissioner. Khan is a bit of a celebrity-wonk. In 2016, she published a 24,000-word paper, "Amazon's Antitrust Paradox," which delved into why current antitrust laws are not sufficient to deal with today's technology companies.

Khan graduated from Yale Law School, where Bork taught decades earlier. Whether or not she is appointed, there is growing momentum to reform and rethink antitrust enforcement in the U.S. For the sake of consumers and small businesses, it can't come too soon.

We’re turning up the heat in August