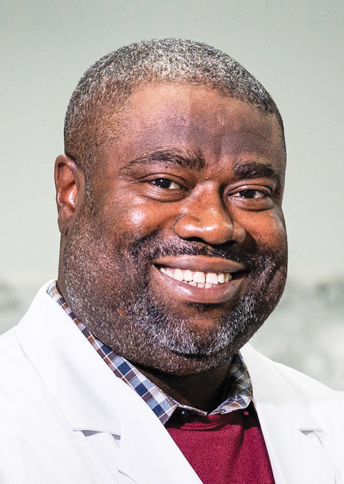 PATH TO PHARMACY: Anthony grew up in Nigeria. Many in his family worked in the arts, but Anthony enjoyed math and science. His path became clear when his father suffered a stroke at 48 and died four years later. He wanted to help patients avoid an early death like his father. “I go out of my way to help my diabetic patients understand the disease. I couldn’t even begin to keep a count of the number of patients who followed me (from jobs in chain pharmacies to his own store). They know I am honest with them, and they listen.”

CULTURAL DIVIDE: Anthony’s pharmacy is in an area that has gone from 40 percent Hispanic to 80 percent Hispanic in a decade. It isn’t enough, he says, to have employees who speak Spanish. Understanding the culture is key. Most of his patients do not understand the need for preventive medicine. For them, going to the doctor is a last resort, he says, so it’s doubly important to have honest conversations with them about health matters.

PHARMACY PASSION: “I am able to help people. Not a day goes by that I don’t have the opportunity to help someone live a healthier life, and that’s the main thing that moves me. I love pharmacy so much that I can’t describe it.”

NCPA’S VALUE TO ME: “NCPA provides the most current information to me, things I need to know for my business.” Anthony says he is impressed by the quality of speakers and experts that NCPA provides on a variety of topics that are important to his business.