You've no doubt heard the phrase "dog days of August." Think about a dog wandering off to find a cool, shady spot under a tree. But that's not where the phrase came from. Legend has it that ancient Romans believed that Sirius (the "dog star") was so bright in the summer night sky that it caused excessive heat during the day. But the Romans were wrong. The August heat has to do with the slight tilt of the Earth toward the sun at this time of year, not dogs or dog stars. But it's a vivid image.

At NCPA, we've decided to take that imagery and run with it. Congress traditionally is on recess during the hottest month. (And I can assure you it's plenty hot in Washington.) No matter where they are this month, we want them to feel the heat from community pharmacy owners. We're not looking for a cool, shady spot. The PBMs sure aren't taking a break this month – or any other month, for that matter. 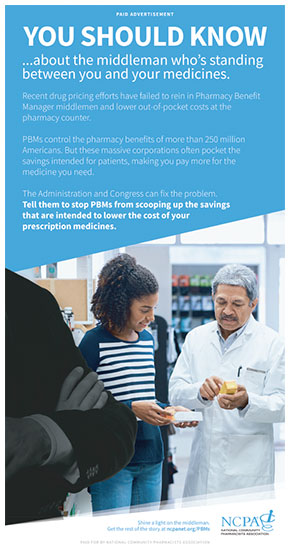 We're particularly focusing on the Senate Finance Committee. In June, NCPA, along with seven other pharmacy stakeholders, urged the committee to address DIR fees as part of a drug pricing legislative package. We had encouraging support from Senate Finance Committee Chairman Chuck Grassley (R-Iowa), and Ranking Member Ron Wyden (D-Ore.), and others on the need to address DIR relief.

We told them that payers and PBMs are gaming a Medicare regulation loophole, inflating patients' prescription-drug costs and forcing more pharmacies to close due to the egregious fees they impose and collect for their own profit. We told them we need to change the definition of "negotiated price" and establish standardized pharmacy quality metrics that are transparent, consistent, and under a pharmacy's control.

We ran ads in the Wall Street Journal and Washington Post to educate policy makers on the PBM business model and the middleman that stands between patients and their prescriptions, and to advocate for change.

But the Senate left town for the August recess before anything happened. So, NCPA has launched our Dog Days of DIR campaign. We want to keep the heat on Congress, especially the Senate Finance Committee. Our goal is to remind them every day that they need to address a DIR fix as soon as they return to work.

You can help, and your help is critical. When members of Congress hear from constituents, they listen. You have a vote, and votes matter. Here's what we're asking you to do:

So, here in the Dog Days of August, we're trying to tilt our world slightly toward Congress, keeping steady heat on them. With our constant stream of letters and videos all over social media, people who have the power to fix DIR won't be able to find a cool, shady spot. In other words, community pharmacy remains dogged in its approach to a solution to the inequity of PBM practices.

P.S. Just a week left to do your part in helping us tell the story of community pharmacy. Please take just eight or nine minutes to take the annual census. NCPA will compile the information collected in this year's census in the NCPA Digest, sponsored by Cardinal Health. It's important. Please take the census today.